Baby Bryce is here! I have been meaning to write this post since we arrived home from the hospital on Wednesday, but time just seems to be melting away.
For those of you that want the full documentary of Bryce’s arrival … here it is!
It all started on Monday, just my second day off from work. Grant and I were home by ourselves. I felt especially tired that morning so kept things low key- but did manage to squeeze in a quick trip to Starbucks. My late morning, I was watching Grant play in the pool and feeling some minor cramping, but they were very inconsistent and hard to detect. By noon I was sleeping on the couch while Grant watched cartoons and when a contraction woke me up I figured I was probably in labor. I called Kyle at about 2 and said he should probably come home, but that it was no big hurry.
Mom and Dad had planned to pick up Grant at 4:30 p.m. and take him to the Mariner’s game. We continued on with that plan, but by that time my contractions had started to hurt – but were bearable and about 10 min. apart. The next hour is kind of a blur. My contractions sped up and I told Kyle we should probably call triage to see if I should come in. They were not the 5 minutes I was waiting for and so I was in no hurry. Well, once we got in the car at 5:45 p.m., the contractions started really speeding up to about 3 minutes apart and by the time we were at admission I could barely keep my composure but I still managed to dig out my insurance card and license!


Once admitted, at 6:15 p.m., they checked me and I was already at 8cm (10 being the optimal #). We were shocked. The nurses literally threw me on a bed and rushed me up the elevator and to my room. Nurses were saying, “call Dr. Jordan” and when we arrived at the room I was motion sick from the crazy bed driving. It was chaotic. The nurse was trying to get the IV for my epidural, but it was taking forever. I had double the nurses because I hit the shift overlap and they were all running around because the room I was in was not fully stocked. Dr. Jordan arrived and shortly thereafter my water broke and I was told there was no time for drugs. I was devastated!
By 6:46 p.m. baby Woods arrived. He had a head full of dark hair and was much chubbier than Grant. He cried right away and for the first 15 minutes had no name. Those of you that know us know that we could not make up our mind, Gavin – Reid – Reece, well Kyle had the final say and picked Bryce, like Bryce Canyon and Scott after Kyle’s middle name.
I still cannot believe he is here! We are doing great and just finding our rhythm now. We are looking forward to all of you meeting him. In the meantime, enjoy these pictures. 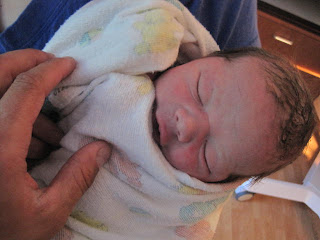 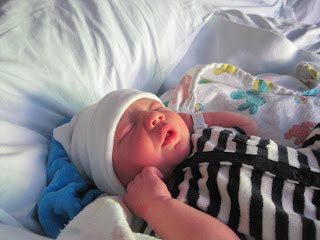 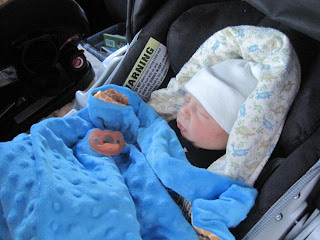 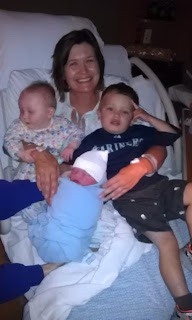 And no, I do not have three boys, just two. That's my nephew, Connor, in the pjs. 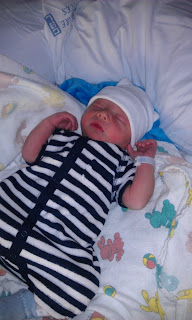